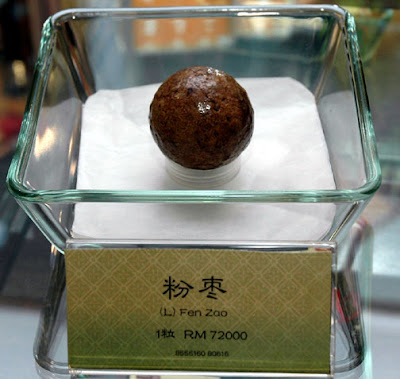 Not too long ago, an internet pal of our son came down with dengue and was admitted to the local hospital in Singapore. Apparently, it was too late and she died of dengue haemorrhagic fever after a couple of hours of admission. We were all saddened to hear of the sudden death as she was only 19. Last month our son’s other friend was feeling all uptight as her father was warded in a Kuala Lumpur private hospital as it was another case of dengue fever. The family resides in an apartment not far from some construction sites with abandoned material. These could have been good breeding ground for the Aedes mosquitoes. Our son visited him at the ward and told us that this uncle-friend needed a blood transfusion the next day as his blood count had dropped drastically. It reminded us of the epsiode of our reader-cum-friend in Banting who needed eight packs of blood for the same cause.

Suddenly, it struck us of a Chinese folk remedy introduced to us by a mutual friend. This herbal subject is the porcupine date( Hao Zhu Zao). Well, it’s like a kidney stone of the wild porcupines which goes into deep jungles and feed on wild herbs. We have seen the utmost superior grade at a famous herbal place in Kuala Lumpur with a branded price of RM 72,000 for the whole ball. You actually need a scrapping of half-a-teaspoon for each dose. Yes, we have heard much of its effectiveness in combating dengue fever and raising blood count. So, off we went to a nearby herbal shop to purchase two packs of this ground powder of the porcupine date. It costs RM600.00 for this grade at a single dose. After paying RM1,200.00, we thought the remedy has to do him some good for the money spent. Each grade differs as only experienced herbalist can tell. It all depends on environment as where the porcupines thrive and how well the wild herbs flourish. His wife fed him the first dose that night as he was in a very delirious state of mind. Another dose was given to him early next morning. The doctor who came on round later in the morning was surprised at his rapid recovery. His blood count had raised tremendously and was given an immediate discharge.

According to the Chinese folk remedy, the first dose from a good grade is sufficient to raise the blood count but the second dose helps to prevent joint aches during old age if you have had severe dengue fever before. Sad to say, little or no research has been done on this remedy and not scientifically documented. Older generations who lived centuries ago must have understood of how desirable the active principles of the stone could be. But cheap and natural food listed below can help dengue patients within the hospitalization period and the home recovery time to feel better if taken daily for one month. These are all natural products like double-boiling a few small bitter gourds with a couple of paddy frogs and water. Drink this soup daily for 30 days. Or blend the red flesh and white part of the watermelon into a juice. Discard the green skin. Drinking this fruit juice often can help to cool the heaty body’s system. Another remedy is to sip the juice of the local green coconut in order to balance the body’s fluid. Do not consume the fragrant coconut as it has a different role.

Well, whatever happens to any suspected dengue case, is still best to be diagnosed by the doctor to confirm the infection. We learnt a painful lesson from the young friend’s death.