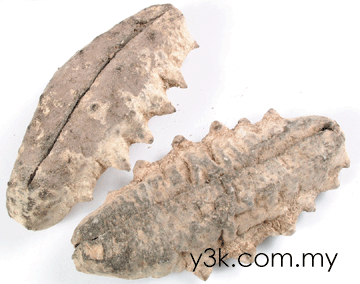 In the oceanic waters of Maldives, Mauritius, Sri Lanka, Fiji, Philippines, Indonesia, Seychelles and Africa, there lies a great wealth of sea cucumbers. Under natural history, they are classified as the Echinoderms group. Biologists believed there are countless other species yet to be defined.

Generally, sea cucumbers like to breed in clean, uncontaminated waters filled with corals. Normally embedded in a depth of 40-60 feet sandy grounds, they at times do perch on top of sea-bed rocks, forming a friendly colony with sea urchins and starfishes.

Environmentalists treasure these sea creatures as it helps in the natural evolution cycle of the Earth. Plants grow in the sea and produces oxygen to make the air breathable. Sea cucumbers nurtured on these drifting algae plants as it provides the right food for them. The marine plankton and the plant plankton co-habitat with one another. Thus,over many generations, a chain of evolution forms.

Throughout its life cycle, both sexes of sea cucumbers have good reproductive years. During the spawning season, sperms released are likely to fertilized with eggs breed. After the hatching period, larvae evolve and begin to develop slowly. Small larvae may be food to the bigger fishes, crustaceans, prawns, molluscs, octopuses who prey on them.

A matured sea cucumber has its own biological defensive weapon. When provoked, it is prompted to thrust out its internal organs but returns quickly to its normal self when left alone. They are normally harvested at a depth of 40-60 feet but sometimes it gets down to 100 feet deep. After the harvest, they are brought up to shores. The cleaning process begins but it does differ slightly in the processing for each variety caught.

Tips:
1) Sea cucumbers are quite fat-free and possess good proteins. This is a much sought after dried seafood delicacy. Hokkiens (a dialect group of the Chinese) will definitely cook this ingredient as festive food.
2) In Cantonese, it is known as Hoi Sum. It incorporates a pun with a symbolic rhyme of Happy hearts. This is reasonable enough why sea cucumbers make good gift packs during Chinese New Year.

A first-hand knowledge of :

(A) Steps taken in cleaning teat fish for export. (chee poh sum in Cantonese)
Use sea water to soak it for eight hours. Change sea water constantly, till it is clean. Bring sea water or plain water to a boil. Add in a couple of sea cucumbers to boil for 45 minutes. Repeat with the rest of sea cucumbers. Turn off the heat and let it cool naturally. Slice open at a length of two-three cm and clean off entrails. Repeat the boiling step all over again to do a thorough job.

After the cooling process, pierce a sharp, bamboo skewer through the body. This helps to retain its shape. Flip over to rest it on its tummy side. Put it out into the sun to dry. Later, roast it in the oven for a while to ensure even drying. Remove the skewer and to retain a shape, bind it with a string each. Place it under the scorching sun to dry again. Untie the string, sort out the grades and it is ready for export.

(B) Processing sand fish
Clean off all entrails. Drain dry on bamboo racks. Boil and let it cool naturally. Bury it in the sand for 15-18 hours. Bring it out and give it a good scrub. Boil again, cool thoroughly and a final step, sun it once more. Only properly dried sea cucumbers can have a good storage life. This is then marketed to the middleman who would resell it for culinary and medicinal purposes. 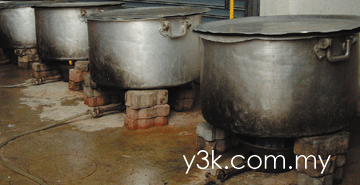 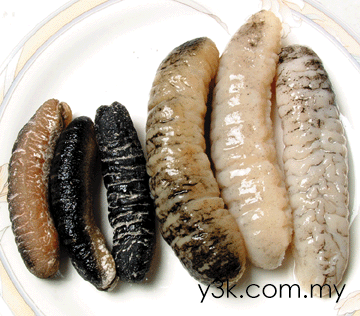 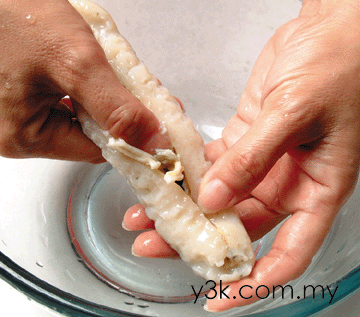 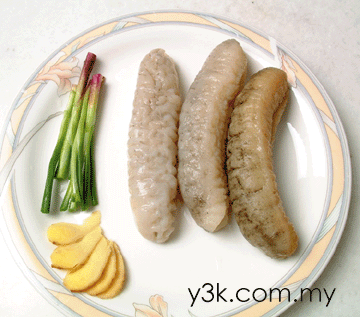 Homework for Home Cooks. The cleaning process of sea cucumbers

Sea cucumbers, disregarding sizes and colours, possess the same nutrients. They contain loads of protein and are low in fats and cholesterol. Being nicknamed as Ginseng of the sea, it is believed to have some curative remedies. The jelly-like fibrous, spongy substance are considered to be good for hypertension and is an aphrodisiac in the Chinese health benefit language.

A few points are printed here to help you to select a prime buy. The sea cucumbers must be really dried, knock it against a table's surface. Listen to the strong sound, the heavier the echo, the better it is. Well dried sea cucumbers have a good storage life. The spiky chee sum can easily be recognised. Teat fish or chee poh sum is sturdy built and has two little spikes at the sides. Some are not too obvious and at times it can be mistaken for another variety, which bears a close resemblence.

Sand fish has a rounder appearance and has horizontal lines across. This is the most common type for household purchases. It needs a trained eye to choose the varieties and a non-unscrupulous dealer to help you.

When you need to cook sea cucumbers, prepare the tedious task, days ahead. Give it a wash, soak it in a basin of tap water for one day.

On the second day, boil a pot of water. Turn off the heat, immerse in the sea cucumbers and cover up the pot. Soak for the whole day.

On the third day, split open the stomach, remove all entrails, scrub it inside out, very clean with a brush. Boil another pot of water. Turn off heat and immerse cucumbers in again till it is soft enough. Remember the water must be boiling hot before you turn off the heat, the pot and water must be free of oil.

As a matter of fact, you never soak dried seafood of any kind in water that has even a drop of oil. The sea cucumbers should have doubled its size now. To remove the fishy odour, place slices of old ginger, stalks of spring onion and some Chinese cooking wine into a pot. You either use a stock or plain water to cook it for 15-30 minutes. After this process, it should be ready for its pairing-off with other ingredients.

Sea cucumbers are virtually tasteless on its own. It absorbs the flavour from stock of the dishes. It can withstand long terms of cooking like braising, double-boiling, simmering or it can be stir-fried with sauces ranging from savoury, sweet, sourish or spicy.

At any rate, try cooking our recipes printed. The enthusiastic home cook will surely be able to dish up something wonderful for this festival. Happy cooking. 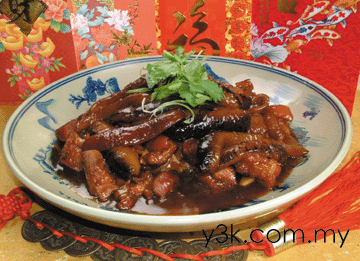 Method:
1. Parboil pig's trotter pieces for five minutes. This is to remove the oil and scums. Dish up and drain dry.
2. In luke warm oil, stir-fry sea cucumber pieces. Remove and drain away excess oil.
3. Heat clean wok, add in 1/2 rice bowl oil and caramel the sugar till a light golden colour is achieved. Do this process on a very low heat. When the sugar solution is bubbly, put in no.(1). Stir well over a high heat.
4. Add in minced garlic, seasoning and water. Simmer over medium heat for 1 hour.
5. Add in the whole garlic bulbs and sea cucumbers. Top with extra water if necessary. After 1/2 hour, check ingredients for tenderness and gravy should be rather thick in consistency.
6. Finally, drizzle in the Chinese cooking wine and dish up contents.
Posted by Y3K food & travel at 15:54

I am producer and exporter of dried sea cucumber from Spain and South America. In this moment I am exporting from Spain to Canada, Mexico, Japon, China Continental and Hong Kong. 100% Fishing wild waters (WILD) and with soft body and with soft texture. Very pleasant odor and free of salt or sand and without lime, do not have any rest inside, so it’s a totally ready to rehydrate and used. https://driedseacucumber.weebly.com

I like your blog of the same product that we are exporting Dried Sea Cucumbers. Spanish dried sea cucumbers for sale for the chinese market and other countries. https://spainseacucumbers.blogspot.com